There are actually a worrying number of spells that allow you to try to do this, but the only is Arms of Hadar. It’s the first-level spell that’s exclusive to the Warlock list and summons “tendrils of dark energy” that attack every creature within 10ft.

You invoke the facility of Hadar, the Dark Hunger. Tendrils of dark energy erupt from you and batter all creatures within 10 feet of you. Each creature therein area must make a Strength saving throw. On a failed save, a target takes 2d6 necrotic damage and can’t take reactions until its next turn. On a successful save, the creature takes half damage but suffers no other effect. When you cast this spell using a spell slot of 2nd level or higher, the damage increases by 1d6 for every slot level above 1st. 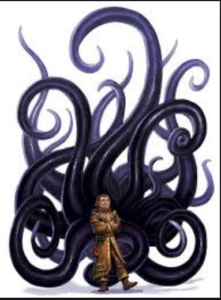 At the caster’s behest, the bottom would sprout tendrils of dark energy during a 10-foot (3 meters) radius. they might swing at the creatures within the area and harm them with their necrotic energies and hinder them. Only a test of strength would lessen the harm and not cause the creature to be hindered.

The nature of Warlock spell slots means for the vast majority of the sport you’ll be casting it at higher levels. Again, the scaling may be a little anemic, dealing only 6d6 when fired off through a fifth-level slot. For comparison, this is often just over half the damage a Fireball using an equivalent slot would cause, with a smaller area of effect and therefore the requirement that you’re standing right within the middle of the enemy formation.

It’s a wonderfully evocative spell that’s great RP-bait for nice Old One pact Warlocks and may be a useful spell for a Warlock who wants to urge out of a pickle, but it’s also very situational.

The fact that Arms of Hadar hits everyone in range, regardless of their allegiance, severely restricts its ability to counter an ambush or charging enemies, and ideally, traditional long-range spellcasters should never get into a situation when they’re surrounded by enemies within the first place. Even Blade-locks probably have better uses for his or her spell slots once they get a couple of levels under their belt.

At first level Arms of Hadar may be a decent spell for getting you out of sticky situations and dealing damage over a good area. However, despite its awesome flavor it soon gets outclassed and is perhaps best left by the wayside.

If you’re desperate for an opportunity to use tentacle-based attacks – which is entirely understandable – it’d add up to stay it available until you’ll learn the far more effective (and thoroughly creepy) Hunger of Hadar then swap it out for something more practical.

It seems a universal rule that from comics to boardgames, all aspects of nerd culture must eventually make some kind of nod to the Cthulhu mythos. In D&D this often manifests within the sort of Warlocks battering people with otherworldly tentacles.