Explore the breadth of D&D’s monsters during this immersive 224-page volume full of beautiful illustrations and in-depth lore. Volo’s Guide to Monsters provides something exciting for players and Dungeon Masters everywhere!

The esteemed loremaster Volothamp Geddarm is back and he’s written a fantastical dissertation, covering a number of the most iconic monsters within the Forgotten Realms. Unfortunately, the Sage of Shadowdale himself, Elminster, doesn’t believe Volo gets a number of the important details quite right. Don’t miss out as Volo and Elminster settle (academically speaking of course) to illuminate the uninitiated on creatures both common and obscure. Uncover the machinations of the mysterious Kraken Society, what’s the origin of the bizarre froghemoth, or the way to avoid participating within the ghastly reproductive cycle of the grotesque vargouille.

Dungeon Masters and players will get some much-needed guidance as you propose your next venture, traipsing about some dusty old ruin in search of treasure, lore, and let’s not forget … dangerous creatures whose horns, claws, fangs, heads, or maybe hides might comfortably adorn the walls of your trophy room. If you survive.

This is an in-depth adaptation of Volo’s Guide to Monsters, found out within the Roll20 interface during a way that encourages Dungeon Masters to be ready to immediately integrate the content within their adventures. 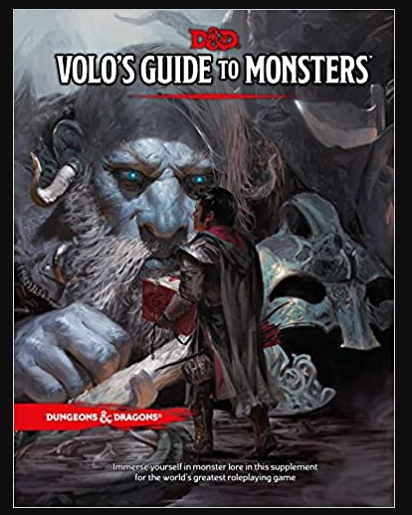 Volo’s Guide to Monsters maybe a 5th-edition Dungeons & Dragons sourcebook that describes monster lore and lairs, playing monster character races, and provides the stat blocks of the many monsters old and new.

The esteemed loremaster Volothamp Geddarm is back! He’s written a fantastical dissertation, covering a number of the foremost iconic monsters within the worlds of Dungeons & Dragons®. But the Sage of Shadowdale himself, Elminster, doesn’t believe Volo gets a number of the small print quite right. Don’t miss out as Volo and Elminster team to illuminate the uninitiated on creatures both common and obscure.

Sure to inspire any Dungeon Master, this book explores the stories and lairs of varied monsters. Including giants, mind flayers, orcs, and goblinoids. Players also can find rules for enjoying the spread of the latest races, including the angelic easier and therefore the feline taxi. Also included are game statistics for many monsters—some new the sport, and a few that hail from the game’s past—which are able to appear in D&D adventures as mighty friends or fearsome foes.

There is a comforting sameness to the format needless to say, which traces all the way back to 1st Edition. It’s a standard joke about role-playing aficionados that the entire complexity of human behavior gets reduced right down to a series of charts. Volo’s Guide has stressed on expanding and drilling down on familiar character races, making that quality abundant here. I’m torn between appreciation and befuddlement that a whole section on ideas for role-playing a hag culminates with a d6 chart on “Hag Flaws.

Especially such staples as orcs, goblins, and kobolds that always get lumped together as a dull monolith. You know, antagonists A, B, and C. By dedicating a part in monster lore to kobold communities, for instance—featuring such cool things as a full-page kobold layer map, then dedicating a neighborhood of the bestiary to specialized kobold characters just like the inventor, or dragon shield—it provides tons of personality to an otherwise easily forgettable monster.

There’s also that variant cover provided by Hydro74, which was only available during a limited pressing. At a D&D event at The Meltdown in l. a. , I need to see the illustration up close—and in red paint. It’s so striking, and that I think represents a departure from the “house style.” My first thought was Cthulhu, of course, but what did you think?

It’s evocative of the first days of Dungeons & Dragons pen and ink interior illustrations found in books just like the original Fiend Folio. They weren’t nearly as polished because the contemporary art but had an earnest strangeness that I tend to urge sentimental about. Trends in contemporary fantasy illustration tend to specialize in manufacturing realistic physiology for these creatures, like how a shoulder for the second set of arms will rest against a torso. It’s a cool little visual puzzle to unravel, but within the case of something just like the Beholder sub-types listed here—which are apparently created from each other’s dreams—it’s like, go nuts, man. Get super goofy with it.

As for giants, what Volo’s lacks in name only charts, it makes up for in some really interesting giant classes. Frost giants who became mutated berserkers through a profane ritual of troll-eating, and Storm Giants who debar death by becoming acts of nature, are just two of the clever alternatives to plain giant-type stat-blocks. Which brings me back to my earlier point: I’m enjoying Volo’s more for the ideas introduced than the mechanical aspect. As nice as a bigger bestiary is, or playable character races are, the concepts are what gets me excited to satisfy copy with my friends and roll some dice.

The idea of being categorically good within the face of seemingly insurmountable evil is perhaps just getting to become more appealing now that we’ve thought of what we’re certain over the subsequent four years. Who knows, maybe the election will do more for Dungeons & Dragons than Stranger Things did!

Jokes aside, glad we found some basis over Volo’s Guide since it looks like we’ve very different D&D experiences. Also, it’s pretty obvious that you simply got to make your thanks to Chicago to hitch the remainder of the AVC during a campaign against the deplorable Trumpzilla.