As a part of the action wont to cast this spell, you want to make a melee attack with a weapon against one creature within the spell’s range, otherwise, the spell fails. On a hit, the target suffers the attack’s normal effects, and green fire leaps from the target to a special creature of your choice that you simply can see within 5 feet of it. The second creature takes fire damage adequate to your spellcasting ability modifier. The green-flame blade was an evocation spell that caused a burst of green fire to leap from a swinging weapon.

This spell’s damage increases once you reach higher levels. At the 5th level, the melee attack deals an additional 1d8 fire damage to the target, and therefore the fire damage to the second creature increases to 1d8 + your spellcasting ability modifier. Both damage rolls increase by 1d8 at the 11th level and 17th level. 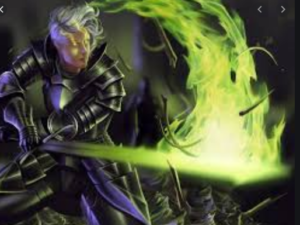 As the spellcaster performed an attack with a weapon, a green flame erupted from it towards another nearby target. The effect increased because the spell caster grew more powerful because the flames also increased the damage dealt by the weapon itself.

Second, neither green-flame blade nor booming blade works with Extra Attack or the other feature that needs the Attack action. Like other spells, these cantrips require the Cast a Spell action, not the Attack action, and that they can’t be wont to make a chance attack unless a special feature allows you to try to so.

Some spells and other game features create a section of the effect that does something when a creature enters that area for the primary time on a turn or when a creature starts its turn therein area. The turn you cast such a spell, you’re primarily fixing hurt for your foes on later turns. Moonbeam, for instance, creates a beam of light that will damage a creature who enters the beam or who starts its turn within the beam.

Entering such a section of effect needn’t be voluntary unless a spell says otherwise. You can, therefore, hurl a creature into the world with a spell-like thunder wave. We consider that clever play, not an imbalance, so hurl away! Confine mind, however, that a creature is subjected to such a section of effect only the primary time it enters the realm on a turn. You can’t move a creature in and out of it to break it over and once again on a similar turn.